Music feeds the soul and few people understand its power better than Danny Gokey. His young life has been a rollercoaster ride and music has been his constant companion. It sustained him following the death of his first wife, Sophia, and it propelled him up the charts after the world discovered his talent on American Idol. Music has shaped his life, providing a sense of purpose and direction, even in the most trying times.

Music feeds the soul and few people understand its power better than Danny Gokey. His young life has been a rollercoaster ride and music has been his constant companion. It sustained him following the death of his first wife, Sophia, and it propelled him up the charts after the world discovered his talent on American Idol. Music has shaped his life, providing a sense of purpose and direction, even in the most trying times.

On Gokey’s new album, Hope in Front of Me, the Milwaukee native delivers a potent collection of songs brought vividly to life by his warm, soulful voice. The project percolates with energy on such vibrant up tempo tunes as “Take it to the Limit” and simmers with emotion on such tunes as the compelling title track where he sings “I know in my soul no matter how bad it gets, I’ll be alright. There’s hope in front of me.” For Gokey, those words are more than just lyrics to a great song. They define his life and underscore his mission to reach others with hope and entertainment. Those words might seem mutually exclusive to some, but Gokey knows the value they have combined.

“I wanted to mix hope and entertainment but not in a way that would be cliché or sappy,” Gokey relates. “I want to deliver a message that feeds the soul, but makes you want to move and groove to the music. That’s always the goal when I write. I’m a person of faith, so I always want my songs to have a strong message of hope. I want to write them in a way that is fresh. ‘Hope In Front of Me’ has got a great message, but it’s also got a great groove to the song so you are moving and your soul is getting fed while you are singing and jamming to the music.”

“Hope in Front of Me” is the lead single from Gokey’s finely crafted sophomore album and has enthusiastically been embraced by the gatekeepers at radio and the fans who have been supporting Gokey since he placed third on season eight of American Idol. He followed his Idol experience with a debut album on 19 Recordings/RCA Records that spawned the hit singles “My Best Days Are Ahead of Me” and “I Will Not Say Goodbye.” The album debuted at No. 4 on the Billboard charts and earned Gokey the best opening-week sales by a debut country male artist in 18 years. He hit the road in support of the album touring with Sugarland, Taylor Swift and other high profile acts.

“I loved it and had a lot of fun making the first album,” Gokey says. “It was a big learning experience. I feel like God ordained it and it brought me to Nashville.”

Music City definitely felt like a comfortable home for the talented Wisconsin native who grew up listening to a variety of music from Keith Green to Tim McGraw to the Tempations. “My dad was my biggest influence for music,” says Gokey, who was born the fifth of six children. “We listened to Dallas Holm, Ray Boltz, dcTalk and Sandy Patti, but we also listened to country music like Brooks & Dunn and Lee Ann Womack as well as funk and soul music like the Temptations, the Four Tops, The Chi-Lites and the Average White Band. My dad had really diverse taste in music and it was a great music education.”

Gokey has always loved music, but in the early days, it wasn’t the job that paid the bills. “I drove an eighteen wheeler semi-truck, a big rig,” he says. “I liked it actually. Was it what I wanted to settle with for the rest of my life? No, because music was where my passion was.”

His wife Sophia encouraged his dreams and urged him to audition for American Idol. Just a month before his audition, Sophia died unexpectedly after what should have been a routine heart surgery. The couple had been high school sweethearts and Danny was devastated. Yet in the midst of his sorrow, he honored Sophia’s wish and auditioned for American Idol a month after she passed. He advanced through the competition. Viewers were touched by Danny’s story and the depth and power of his voice made him a fan favorite.

American Idol not only helped Gokey land a record deal and catapulted his voice into the homes of millions, it also help provide a platform for him to launch Sophia’s Heart, an organization founded to carry on the legacy of giving started by his late wife. The organization provides a place to live for homeless families in Nashville, and Gokey is proud of the way Sophia’s Heart has expanded to care for a growing number of families each year.

Even as he juggled his work with the growing non-profit venture, Gokey still found time to co-write all but two songs on his new album. Produced by award-winning music legends Keith Thomas (Amy Grant, Vanessa Williams) and Bernie Herms(Natalie Grant, Barbra Streisand) Hope in Front of Me showcases the depth and breadth of Gokey’s artistry as a songwriter and vocalist. Each song reverberates with the emotional honesty and life-affirming messages that have become hallmarks of Gokey’s music. “Love Will Take You Places” boasts a hauntingly beautiful melody and powerful lyric about love’s ability to take us places we never imagined we could go. “It’s Not Over” starts with a sweet soulful vibe that builds into a vibrant anthem of survival and triumph.

“Tell Your Heart to Beat Again” is a gut-wrenching ballad that talks about pain and loss, yet serves as a reminder of the hope that is always present even in the most trying times. “This is What It Means” is a revealing ballad that Danny says is the most autobiographical. “That song is the most about me,” he says. “Literally every line in there is written from a true experience. It talks about love and says ‘there’s fear, there’s faith, there’s loss, there’s grace. I’ve seen it from both sides. This is what it means to be alive.’ It’s the truest song on the album.”

Danny Gokey is a survivor. When he sings, there’s an authority and conviction that comes from life experience. He’s been through so many challenges, yet hope was always a part of his journey. These days Gokey is in a sweet season. He’s remarried and he and his wife, Leyicet, have a beautiful son, Daniel Emanuel, born January 20, 2013. Gokey chronicles his life in his autobiography, also titled “Hope in Front of Me” and in the songs on his new album. “Life might not always makes sense,” he says. “There’s no justice in it and sometimes it might not seem fair, but it’s not the end of the road. Turn the page. Move forward and keep putting your life in God’s hands. There is always hope ahead.” 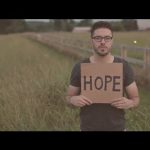 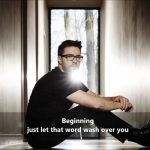 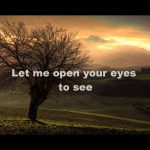