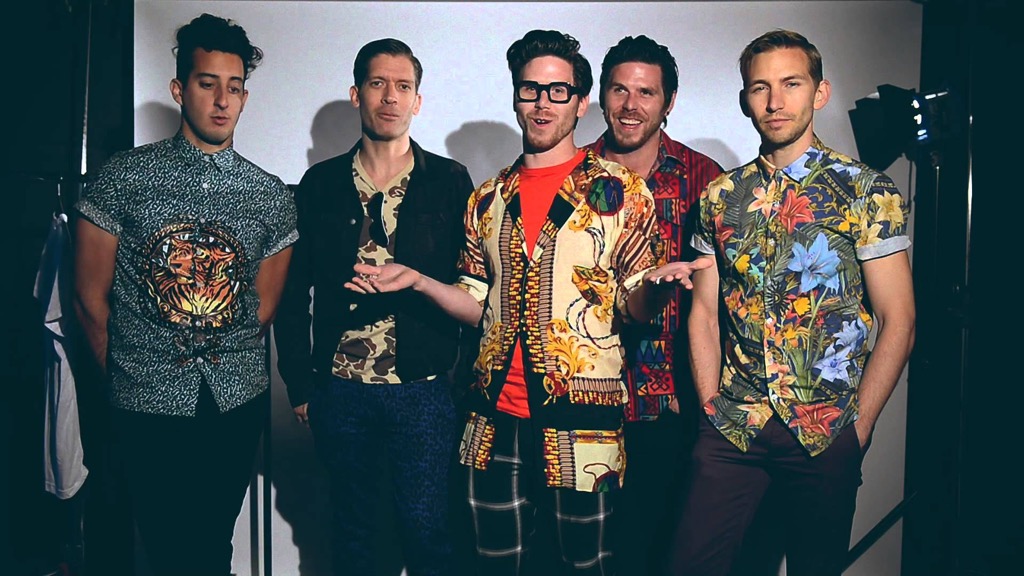 Derek “Chap Stique” Mount recalls a conversation he had a few years ago with Jerome Olds, the patriarch of the family whose sons started Family Force 5 over a decade ago. “At one point he said to me, ‘Hey man, you know what’s wrong with you guys? When you first came out, you were reckless. You’re not reckless anymore,’” recalls the guitarist. “And on this album, we wanted to capture that recklessness again. Just hit ‘record’ and see what happens.”

The Atlanta-based Family Force 5 have always been a bastion for exciting music and onstage dynamism. Their 2006 debut album, Business Up Front/Party In The Back, was teeming with guitar-driven crunk-metal, rapping and the commanding vocals of frontman Solomon “Soul Glow Activatur” Olds. The follow-up album, 2008’s Dance Or Die, found them broadening their realm of party-hearty possibilities, incorporating everything from radio-friendly pop to soundtracks for sweaty mosh pits and electro-driven dancefloors alike. 2010’s III found them maintaining a lean-and-mean rap-rock stance, aesthetically beating many similar-sounding chart-topping acts at their own game. Consider that they’ve also been in charge of their own destiny for the last six years, being fiercely independent, self-sufficient and beholden to absolutely no one. Team FF5 have always been a legion of road dogs, dialing up thousands of miles on touring vans and busses to bring their rockin’ good times to the planet. Anybody who’s been paying attention to them knows full well their party never stops, from touring hi-jinx (go stick “Really Real Show” into YouTube’s search engine and see what happens) to the post-show dance parties where the band members spin their favorite dance tracks for fans that didn’t want to go home quite yet. Respect for the band came from the most unusual places, whether it was asked to join Alternative Press magazine’s 2009 tour (alongside 3OH!3 and the Maine) or having the Oregon State University football team embrace their freewheeling track “Chainsaw” during games. The band may have well copyrighted the phrase, “go hard or go home,” when you consider they’ve built as much sweat equity as they have goodwill: Consider how their videos have garnered a cumulative 30 million views, and how they’ve held court at some of the world’s prestigious music festivals (Sonisphere, Bamboozle, EO Day, Warped Tour UK), in addition to scoring placement in everything from feature films (Warrior’s Way, Battleship, Almost Alice) and commercials (Target) to the veritable alphabet soup (ESPN, WWE, NHL, CBS Sports, MTV) of television. If you want to stop for a moment and take a breath after reading that last paragraph, feel free. They make a lot of other bands look like hopeless couch-surfing slackers.

When Solomon informed the band last summer he wished to be closer to his family and was resigning from the Force, hard decisions needed to be made. Should they adjourn the party and chase other pursuits? Or continue bringing beats, guitar crunch, crazy electronics and empowering lyrics to fans hungry for sincerity as much as sonic kicks? The remaining members chose to continue, but then wondered who they would get to front the band. That anxiety was short-lived, since the answer was in front of them all the time. Well, actually behind them onstage for so many years…

“I’ve always said I was a better dancer than I was a drummer,” says Jacob matter-of-factly. “The only reason I got the job eight years ago with my brothers is because I could play kick, snare and hat at the same time and sing. All of us had to wrap our heads around the fact we’d been playing together for so long. Solomon and I as brothers had been playing together in several different bands for, I think, 20 years. That’s a weird adjustment.” Jacob’s vocal contributions have always been key to the FamFo aesthetic. Given the band’s range of musical idioms, Jacob is always on point with whatever the song required. “It’s a total Jekyll and Hyde situation,” says Jacob about his performance style. “I’m totally comfortable with the vibe of the title track—a little new wave, a little more pop, a little more soulful on the voice. I can’t make my voice sound like there are razorblades in it. But for some reason, growing up down South in Atlanta, I only really listened to R&B and hip-hop. I love rock ’n’ roll for what it is, but there’s an aspect of how I phrase things in the parts that comes naturally to me.” Not surprisingly, Olds’ vocal acumen is matched by his physical ability to bust a move onstage. “I grew up watching Michael Jackson,” he says proudly. “When people asked me what I wanted to be, I said in all earnestness that I wanted to be a backup dancer for Janet Jackson. Which is hilarious, but I totally kill iton her Rhythm Nation record.”

“If anything, we have learned of the crimes we committed against our fans by restraining Jacob behind a drum set for nine years,” says Mount. “I’m going to vouch for my boy: There is nobody else we would rather have up there.”

“If my brother hadn’t have stepped down, I wouldn’t have had the opportunity to do this with our band,” says Jacob, “So I will always love and respect him.”

Having avoided the anxiety of breaking in a new frontman, the band were relieved and rejuvenated. Which is why Time Stands Still is the best batch of Family Force fun yet. You could accuse them of being clinically schizophrenic as ever, mixing genres, techniques and approaches as if they were trying to pick a pair of matching socks out of the laundry in the dark. But FF5 realizes the world’s playlist culture dictates that nobody listens to just one kind of music anymore. So when the laser hits the disc, your head is immediately nodding to the electro-metal-crunk of “Sweep The Leg,” a track Mount describes as “a jock jam for the future. I’d love to hear it on an ESPN highlight reel.” Rapper KB guests on the synth-driven “BZRK” to spur the band on, while “Everybody Lose Your Mind” mixes Mount’s rock sensibilities with the rinse-and-drop aesthetics of the EDM scene, as Jacob veers from strident singing to intonations reminding you “this is the last time to lose your mind.” Emo pop and cool new wave swagger collide on “Dance Like Nobody’s Watching,” “Jet Pack Kicks” is a dance party for Auto-Tune robots auditioning for the Transformers franchise, and tracks like “Raised By Wolves” and “Glow In The Dark” bring the rock with all the power and energy, and none of the excess.

“Family Force 5 should be as fun as possible,” Mount stresses. “At times in our career, there’s been a temptation to second-guess things. There are a lot of moments where one of us would do a take and would say, ‘That’s not perfect, I want to record it again.’ And the response to that was, ‘Yes, it is. Leave it.’ Sometimes the intimacy lies in the mistakes and the imperfections. This band doesn’t need to be a version of anything else. We’ve got a lead singer that listens to nothing but Tevin Campbell, Zapp and R&B a bass player who is as rock as they come; a keyboard player who loves new wave; a drummer who knows about every cool hipster band ever, and I’m a metalhead who’s into weird indie stuff. When you put all that together, it’s a bizarre stew with complex ingredients.”

While Time Stands Still is loaded with swagged-out pop-culture references ricocheting off big beats, cool synth lines and propulsive guitar riffs, there are also demonstrations of genuine heartfelt emotion informing the proceedings. Jacob is joined by Melodie Wagner (of Hillsong Young & Free) on “Walk On Water,” an uplifting duet integrating mindsets of both spiritual and dedicated love. The title track and the stirring “This Is My Year” are songs offering equal doses of encouragement and empowerment to generations of listeners, whether they grew up watching John Hughes movies in the ’80s or waiting in line to buy tickets to see fun. And on the joyous, celebratory “Let It Be Love,” Jacob delivers a couplet that is all-encompassing: “It’s not about the stand you take/but the grace we give/It’s not about the name we make/but the life we live.” It’s a sentiment that transcends attitudes, belief systems and the spiritually empty things humanity puts entirely too much emphasis upon. “This album is about joy and escapism,” says Mount. “At times, it’s light-hearted and carefree, and in other moments, it goes deeper. I really hope someone can put this record in the car stereo and just smile the whole drive home.”

America should pay attention to Mount and make sure its gas tanks are filled. Because Family Force 5 are going to make it even easier for the country to get their smiles on. Upon the release of Time Stands Still, the band are gearing up and bearing down hard for the duration of 2014, working on remixes of tracks from the new album, lensing new videos, touring with the Newsboys, writing music for their annual Christmas Pageant tour (dragging tons of road cases filled with Santa suits, snow machines and peppermint potpourri) and volunteering on a service trip abroad. In other words, Family Force 5 business as usual.

It’s quite clear Family Force 5 are paying it forward by playing it backward. One listen to Time Stands Still proves they have a mission statement firmly in place. Simply put, they’ve returned to put the heart in your party. Is there really someplace better you want to be? 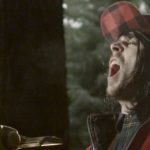 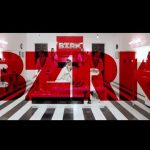 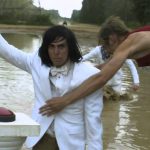