Jonah Kirsten Sorrentino (born June 26, 1975), better known by his stage name KJ-52, is a Christian rapper from Tampa, Florida. The “KJ” part of his name refers to his old rap alias, “King J. Mac,” a name which he later described in one of his podcasts as “horribly cheesy.”[not in citation given] “52”, which is pronounced “five two”, not “fifty-two”, is a reference to the Biblical story of Jesus feeding the multitude with five loaves and two fish, which is also sung about in his song “Push Up” from The Yearbook and in the “KJ Five Two” on It’s Pronounced ‘Five Two. He was awarded the Rap/Hip Hop Recorded Song of the Year for “Never Look Away” and Rap/Hip Hop Album of the Year at the GMA Dove Awards of 2007. On July 28, 2009, KJ-52 released “End of My Rope”, which is the first single for his album Five-Two Television. His song “Dear Slim” is based on Eminem’s song “Stan” and is a sort of personal message from KJ-52 to Eminem.

In 2002, Sorrentino released his second album, Collaborations. The album’s title referred to the numerous contributions made to the album by guest artists, including Pillar, John Reuben and Thousand Foot Krutch. Collaborations also represented his first nomination for a Dove Award, for “Rap/Hip Hop/Dance Album of the Year” in 2003.

KJ-52 has won four Dove Awards, three in the “Rap/Hip Hop Album of the Year” category. He took the 2004 award for It’s Pronounced Five Two, the 2006 award for Behind the Musik (A Boy Named Jonah), and the 2007 award for Remixed. He received an additional honor in 2007, for “Never Look Away” from Behind the Musik, in the “Rap/Hip Hop Recorded Song” category. KJ never tried out for American Idol, but suggested such in his song “Fivetweezy”.

2009 Dove Awards Another productive year for KJ-52 as he was awarded with “Rap/Hip Hop Song of the Year” for “Do Yo Thang”; The Yearbook; KJ-52; Jonah Sorrentino; BEC Recordings/Uprok

In 2009, he released “Five-Two Television”, and album covering a variety of themes and rap styles. It is his first album in which autotune is used, a controversial step among his fans. The album brings us the (fictitious) story of Chris Carlino, a man who has ruined his life, through a series of interludes. As usual for KJ-52, the album includes both songs with a strong Christian message and songs that are meant only to entertain.

KJ-52 also rapped in the Newsboys cover of “Jesus Freak”.

KJ-52 also rapped in the tobyMac remix of the song “One World” on the album Hip-Hope which also includes the KJ-52 remixed song “What You Want”.[citation needed]

KJ-52 released Dangerous on April 3, 2012. It mixes hip hop album with quite a bit of synth, and has some pop-electric. The first released single, “Dangerous”, is more light rock-pop. The second single is called “Shake Em Up”, but is commonly spelled “Shakem Up”.[citation needed] It features guest artists such as Canton Jones on “It’s Goin Down”, Lecrae on “They Like Me”, Thi’sl on “Shake Em Up”, George Moss on “Do the Bill Cosby”, and more. His final track, “Go,” is a remake of the Hillsong United song with the same name. 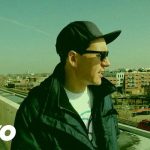